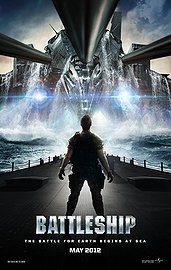 Peter Berg produces and directs Battleship, an epic-scaled action-adventure that unfolds across the seas, in the skies and over land as our planet fights for survival against a superior force. Inspired by Hasbro’s classic naval combat game, Battleship stars Taylor Kitsch as Lt. Alex Hopper, a Naval officer assigned to the USS John Paul Jones; Brooklyn Decker as Sam Shane, a physical therapist and Hopper’s fiancée; Alexander Skarsgård as Hopper’s older brother, Stone, Commanding Officer of the USS Sampson; Rihanna as Petty Officer Raikes, Hopper’s crewmate and a weapons specialist on the USS John Paul Jones; and international superstar Liam Neeson as Hopper and Stone’s superior (and Sam’s father), Admiral Shane.

To be honest, I actually enjoyed this movie more than The Avengers. It has less line setup and went into action mode pretty quickly. There was a couple of scenes made the movie memorable.

First of all, anyone who gets me chicken burrito in battleship style, I’ll marry him right away. Second, I liked the scene where they tried to dock as close to the cove so the alien ship are in the direct line of the sunrise. Third scene when the last destroyer was destroyed and they had to use USS Missouri, a 70-year old decommissioned battleship that has been converted into a museum. It was moving when they invited the retired Navy personnel to join hands to defeat the aliens. The strategy of maneuvering of the old battleship was cleverly planned.

Keep an open mind and don’t be a hater for this movie. You might be surprised that the movie wasn’t half bad. It was well worth of the two hours of my time.