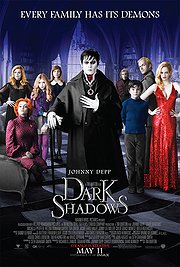 Barnabas (Johnny Depp) has the world at his feet-or at least the town of Collinsport, Maine. The master of Collinwood Manor, Barnabas is rich, powerful and an inveterate playboy…until he makes the grave mistake of breaking the heart of Angelique Bouchard (Eva Green). A witch, in every sense of the word, Angelique dooms him to a fate worse than death: turning him into a vampire, and then burying him alive. Two centuries later, Barnabas is inadvertently freed from his tomb and emerges into the very changed world of 1972. He returns to Collinwood Manor to find that his once-grand estate has fallen into ruin. The dysfunctional remnants of the Collins family have fared little better, each harboring their own dark secrets.

One sentence summarized it all. The trailer was way better than the movie itself.

It seems like the director had no idea which direction it wants to go with, so it was slabbed right in the middle between a horror/drama and a comedy. I knew this is a remake of an old movie which I think it should have been left alone. The only memorable character I liked from this movie was Willie Loomis, the housekeeper, played by Jackie Earle Haley. This movie shown how much Chloe Moretz has grown from Kick-Ass.

My Grade: C (too generous for my taste especially with so many heavyweight casts)