I started a few books, six actually but I can’t get myself in any of the books I’m currently reading. I just wanted a quick and fun read and The Marriage Bargain fits the bill. I knew the story line would be pretty predictable when I started the book and I wasn’t disappointed. Boy-girl get into a marriage contract, boy-girl fall in love with each other, a climax of conflict to separate them apart and the finale with both of them realizing they should be together. 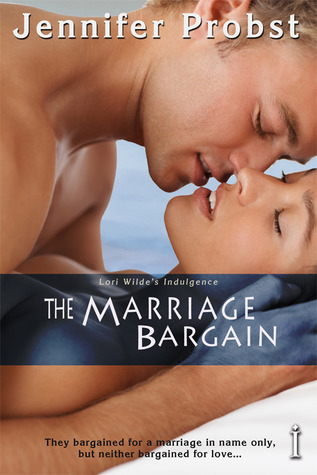 A marriage in name only…

To save her family home, impulsive bookstore owner, Alexa Maria McKenzie, casts a love spell. But she never planned on conjuring up her best friend’s older brother—the powerful man who once shattered her heart.

Billionaire Nicholas Ryan doesn’t believe in marriage, but in order to inherit his father’s corporation, he needs a wife and needs one fast. When he discovers his sister’s childhood friend is in dire financial straits, he’s offers Alexa a bold proposition.

A marriage in name only with certain rules: Avoid entanglement. Keep things all business. Do not fall in love. The arrangement is only for a year so the rules shouldn’t be that hard to follow, right?

Except fate has a way of upsetting the best-laid plans…

First of all, it was the cover which attracted me to this book. Who can resist such a exotic cover?

I just wished that I read this book before Fifty Shades Trilogy because I would enjoy this book way more that I should have. There were a lot of similarities, however, I loved Alexa stronger, selfless character more than Ana.

The Marriage Bargain brought tons of sexual frustration between Nick and Alexa. The only way Alexa would only accept the deal was that both of them practice celibacy. The dialogue between Alexa and Nick was funny and brilliant taking stabs at each other while they get to know each other.

Memorable scene from the book? Alexa was trying to hide dogs she rescued downstairs in Nick’s place by tricking him to stay upstairs the entire night. I was reading so fast trying to see how the little secret was going to unfold. I was laughing out loud picturing the next scenes. Nick got woken up middle of the night, grabbed a baseball bat expecting a burglar and he was in for a big mystery of heavy breathing/panting and scratching. Nick was mad demanding Alexa to take the dogs back but stopped when he realized Alexa was half-naked. They were finally getting it on but abruptly interrupted by the police arrival.