We decided to spend Christmas of 2009 by traveling together to Spain and Portugal instead of doing my usual trip back to Malaysia. We visited cities including Valencia, Granada, Seville, Segovia, Madrid, Toledo, Santiago de Compostela and Barcelona in Spain and Lisbon, Porto and Fatima in Portugal. The map below summarizes our trip. Here are some background information about Spain and Portugal.

Spain or Espana is a member state of the European Union located in southwestern Europe on the Iberian Peninsula. Its mainland is bordered to the south and east by the Mediterranean Sea except for a small land boundary with Gibraltar; to the north by France, Andorra, and the Bay of Biscay; and to the northwest and west by the Atlantic Ocean and Portugal.

Portugal, officially the Portuguese Republic is a country located in southwestern Europe on the Iberian Peninsula. Portugal is the westernmost country of mainland Europe and is bordered by the Atlantic Ocean to the west and south and by Spain to the north and east. The Atlantic archipelagos, the Azores and Madeira are also part of Portugal.

There were a couple of things that we have to get used to while we were there. One, there is siesta, shops will be closed after lunch and re-open a couple of hours later. Two, lunch and dinner are served late, later than our regular meal times, so be prepared to have some snacks.

Valencia, once a royal capital and now a sunny garden city, is the third largest city in Spain.

The Cathedral of Valencia is the seed of the Roman Catholic Archdiocese of Valencia. One of the supposed Holy Chalices, present around the world, is revered in one of this cathedral’s chapels; this chalice has been defended as the true Holy Grail, the most likely candidate for being the authentic cup used at the Last Supper.

We had crispy churros dipped with hot chocolate for snack. We have a sumptuous seafood paella dinner arranged. Paella is a rice dish that originated in its modern form in the mid-19th century near lake Albufera, a lagoon near the eastern coast of Spain’s Valencian region.

We drove to Granada via the Mora Pass and pass through Guadix, a city of southern Spain, in the province of Granada. The famous feature of the town is the cave dwellings in the Barrio Troglodyte where upwards of half the population live. These caves are in no way primitive dwellings and are a solution to the fierce heat of the Granadin summer.

Granada, the capital of the Moorish Kingdom of Spain until 1492.

The pink-gold Alhambra is a palace and fortress complex constructed during the mid 14th century by the Moorish rulers of the Emirate of Granada in Al-Andalus, occupying a hilly terrace on the southeastern border of the city of Granada, now in the autonomous community of Andalusia, Spain. From Alhambra, there  are superb views of the old quarter and Sacromonte, a mountain occupied by gypsy cave dwellers. Fantasy of “filigree” stone carvings surrounded by arabesque gardens and fountains can be seen in Alhambra.

Generalife was the country estate of the king of Granada. Located only a walk away from the main residence, it is located outside the northern fortifications of the Alhambra. When the king felt the need to get away from the lift at court, he could retreat here to relax and reflect.

Seville is the artistic, cultural and financial capital of southern Spain. The city is credited with the invention of tapas and has more than a thousand bars where the choice of food, is virtually unlimited from seafood to ham and sausage and from vegetable to cheese. World Expo 1992 was held here in Seville.

The Cathedral of Seville is a religious building in Seville, Andalusia. It is the largest Gothic cathedral and the third largest church in the world. It is also known as Catedral de Santa Maria de la Sede. The cathedral serves as the burial site of Christopher Columbus.

The Giralda is the bell tower of the Cathedral of Seville. The tower is 97.5m in height and it was one of the most important symbols in the medieval city. The tower’s first two-thirds is a former minaret from the Almohad period of Seville, the upper third Spanish Renaissance architecture. The copper sphere that originally topped the tower fell in an earthquake in 1365. Christians replaced the sphere with a cross and bell. The statue stands 4m in height and has crowned the top of the tower since its installation in 1568.

From the entrance, you can ascend to the bell chamber for a remarkable view of the city and equally remarkable, a glimpse of the Gothic details of the cathedral’s buttresses and statuary. But most impressive of all is the tower’s inner construction, a series of 35 gently inclined rams wide enough to allow two mounted guards to pass.

The Plaza de Espana is an example of Moorish Revival in Spanish architecture, used as a setting for Naboo in Star Wars Episode II.

We had dinner while watching Flamenco show. Flamenco is a style of music and dance which is considered part of the culture of Spain. It is an exotic dance, but is actually native to only one region: Andalusia.

Lisbon is the capital and largest city of Portugal. The 25th of April Bridge is a suspension bridge connecting the city of Lisbon to the municipality of Almada on the left bank of the Tejo river, which commemorates the end of the fascist regime. It is often compared to the Golden Gate Bridge in San Francisco.

Jeronimos Monastery is located in Belem district. This magnificent monastery can be considered one of the most prominent monuments in Lisbon and is certainly one of the most successful achievements of the Manueline style. A pastel de nata is a Portuguese egg tart pastry. It is believed that pasteis de natas was created before the 18th century by Catholic Monks at the Jeronimos Monastery. Within the church are the stones tombs (sculpted by the 19th century sculptor Costa Mota) of Vasco da Gama and the great poet and recorder of the discoveries Luis de Camoes. Vasco da Gama established the sea link between Portugal and India which granted Portugal supremacy at trading in Indian Ocean.

Monument to the Discoveries is a monument that celebrates the Portuguese who took part in the Age of Discovery. Henry the Navigator, the sponsor of Portuguese Discoveries, is the figure at the tip of the monument looking out over the river. The pavement in front of the Monument to the Discoveries features a mosaic decoration showing a world map with the routes of various Portuguese explorers and a wind rose. Belem Tower was commissioned to be part of a defense system at the mouth of the Tagus River and a ceremonial gateway to Lisbon.

Rossio is the liveliest square in the city. On either side of the square are two baroque fountains and in the center is a monument dedicated to Dom Pedro IV.

Estoril is a seaside resort and civil parish of the Portuguese municipality of Cascais. Cabo da Roca is a cape which forms the westernmost point of both mainland Portugal and mainland Europe.

Fatima is one of the most important centers of pilgrimage in the catholic world. The Sanctuary of Fatima attracts thousands of pilgrims each year especially on the 13th of May and the 13th of October, to celebrate the appearance of the Virgin Mary to three shepherd children. Don’t be surprise to see anyone sincerely kneeling towards the sanctuary.

Porto is Portugal’s second city, located in the estuary of the Douro river. The historic centre of Porto was declared a World Heritage Site by UNESCO in 1996. One of the Portugal’s most internationally famous products, Port wine, is named after the city because it is produced in and shipped from the area, more precisely from Vila Nova de Gaia, a city just across the river. Be sure to stop by Majestic Cafe, where J.K. Rowling wrote most of her first Harry Potter book. I love the following photo of the beautiful sunset in Porto. 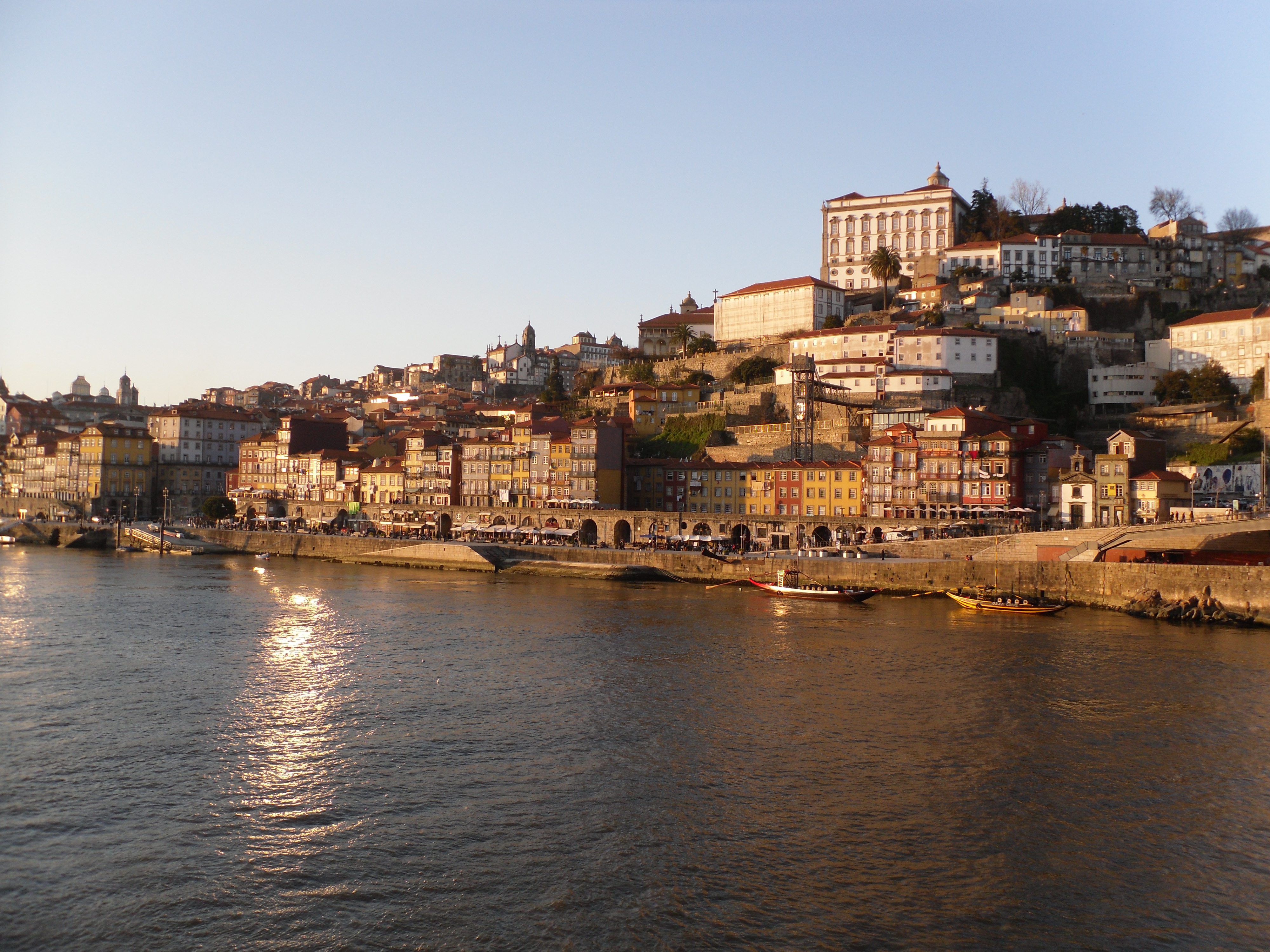 Santiago de Compostela is the final destination of the thousand-year-old pilgrimage route: the Way of St. James. The cathedral houses the remains of the Apostle James.

Segovia is surrounded by city’s medieval wall which itself is bordered by two rivers. The city attractions included the famous Alcazar castle, home to Queen Isabella and world renowned 2000 year old Roman Aqueduct, the largest and best preserved. The Roman Aqueduct which cuts through the center of town and serves as the mintmark on all coins struck in Segovia for over 400 years. Savor the famous Suckling Pig for lunch, a specialty that is slow-roasted until the skin is crisp and the meat succulent. The chef performed meat cutting using a plate.

Sitting on a large hill, “Old Toledo” is encircled on three sides by the Tagus River. This old city retains its medieval road plan. It was raining most of the day while we were there.

We visited a Damascene Workshop to see the ancient Moorish art of interlacing gold on iron or steel and picked up a couple of souvenirs.

Cathedral of Toledo was built in 13th century and is considered to be the pinnacle of the Gothic style in Spain. It has some characteristics of the Mudejar style. One of its more outstanding parts is the Baroque altar called El Transparente with fantastic figures of stucco, painting, bronze castings, and multiple color of marble, a masterpiece of Baroque mixed media by Narcisco Tome enhanced by the daily effect of a shaft of sunlight striking through an appropriately oriented hole in the roof, giving the impression that the whole altar is rising to heaven. Luca Giordano painted the ceiling of ante-sacristy.

Madrid is the capital and largest city of Spain. The Royal Palace is actually used by the king of Spain for state ceremonial activities. The Puerta del Sol is one of the most well known and busiest places in Madrid. This is the center (KM 0) of the radial network of Spanish roads.

On the centre of Plaza de Espana stands a massive stone obelisk with a statue of Miguel Cervantes, the author of Don Quixote. Below Cervantes is the status of Done Quixote on his horse Rocinanate. Sancho Panza is on the donkey.

The Cathedral of the Savior is a Roman Catholic cathedral in Zaragoza. The cathedral is located on the Plaza de la Seo.

Barcelona is the capital of Catalonia and the second largest city in Spain. Barcelona is today an important cultural center and a major tourist destination and has a rich cultural heritage. Particularly renowned are architectural works of Antoni Gaudi that has been designated UNESCO World Heritage Sites. The city is well known for the 1992 Summer Olympics.

Sagrada Familia is a massive, privately-funded Roman Catholic church that has been under construction since 1882 and is not expected to be complete until at least 2026. The Sagrada Familia was designed by Antoni Gaudi.

Port Olimpic is a stylish Marina area in between Icaria and Barceloneta Beaches. Port Olimpic has a good selection of bars and restaurants and has a long wide walkway that connects the two beaches.

La Rambla is a 1.2 kilometer-long tree-lined pedestrian mall street between Barri Gotic and Raval. It connects Plaza Catalunya in the center with the Christopher Columnbus monument at Port Vell.

Montserrat literally means jagged mountain. It is a site of a Benedictine abbey which hosts the Virgin of Montserrat sanctuary.

If I do get a chance to visit Spain one more time, I would revisit Segovia and Toledo.